Featuring a stunning 5th generation X-Trans CMOS 5 HS sensor and X-Processor 5 in a beautifully designed body, photographers and filmmakers alike can now create at the pace of life and the speed of their imaginations.

X-Trans CMOS 5 HS is capable of blackout-free bursts of up to 40 frames-per-second. In burst mode, the sensor’s phase-detection pixels are controlled independently from the image display. This triples the number of possible calculations, which enables the ability to focus at incredibly high-speeds between individual frames with accuracy and precision.

Increased memory capacity dramatically extends the camera’s ability to record continuous frames in burst mode without stopping. Reach blackout free speeds of up to 40fps, make over 1000 frames continuously at 30fps in JPEG, or write RAW images at 20fps* when using electronic shutter on X-H2S.

An improved AF prediction algorithm alongside X-Trans CMOS 5 HS and X-Processor 5 provides a major boost to subject tracking and autofocus accuracy on moving objects, most notably in Zone AF and low-contrast conditions.

X-Processor 5 features subject-detection AF based on Deep Learning techology that automatically detects and tracks a broader range of subjects, including animals, birds, cars, motorcycles, bicycles, airplanes, and trains – as well as human faces and eyes, so image-makers can concentrate on composition and creativity, confident that X-H2S will track focus accurately.

Up to 240 minutes of continuous recording

The camera features a new heat-dissipating structure, increasing the video recording time up to 240 minutes of 4K/60P video. *

*When recording video at 25℃ from a cool start, with the auto power-off temperature set at “High,” bitrate of 100Mbps, a vertical battery grip VG-XH attached and using three batteries. The recording duration depends on remaining battery charge and the type and capacity of a memory card used. When the main unit heats up, filming may automatically be terminated.

In addition to F-Log, X-H2S also supports F-Log2, which records an expanded dynamic range of 14+ stops.* This range is wider than current F-Log and broadens post-production potential.

Add the optional File Transmitter FT-XH* to support the Remote Rec function by wired LAN/wireless LAN. This new feature enables up to four X-H2S cameras to be simulatenously controlled from a browser.

The high-resolution electronic viewfinder has a 0.8x magnification and uses 5.76 million dots for incredible detail. A refresh rate of approx. 120fps supresses image blur and distortion typically caused by looking through the finder at extreme angles, making it easier to track moving subjects more accurately.

-H2S improves on X-H1’s beloved handgrip to provide a more assured feel. This is especially useful when using longer or large-aperture lenses.

The shutter button’s feel has been adjusted to make it more intuitive when half-pressed, helping users release the shutter at precisely the right moment.

Video operation has been made easier, thanks to the stand-alone video-recording button and 1.62 million dot vari-angle LCD monitor, which can be fully rotated – even when HDMI and microphone cables are plugged in. A full-sized HDMI Type A port is also provided for the first time on an X Series camera.

X-H2S can be connected directly to a PC for webcam and livestreaming use in 4K, without requiring the FUJIFILM X Webcam software. It can also be combined with the optional File Transmitter FT-XH to support FTP transfer and tethering capabilities through wired and wireless internet connections, or USB-connected smartphones.

There are no questions yet. Be the first to ask a question about this product. 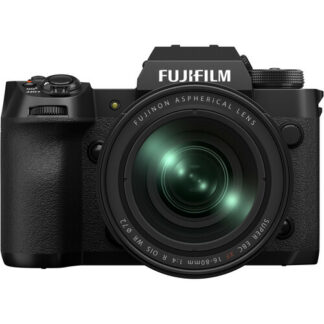